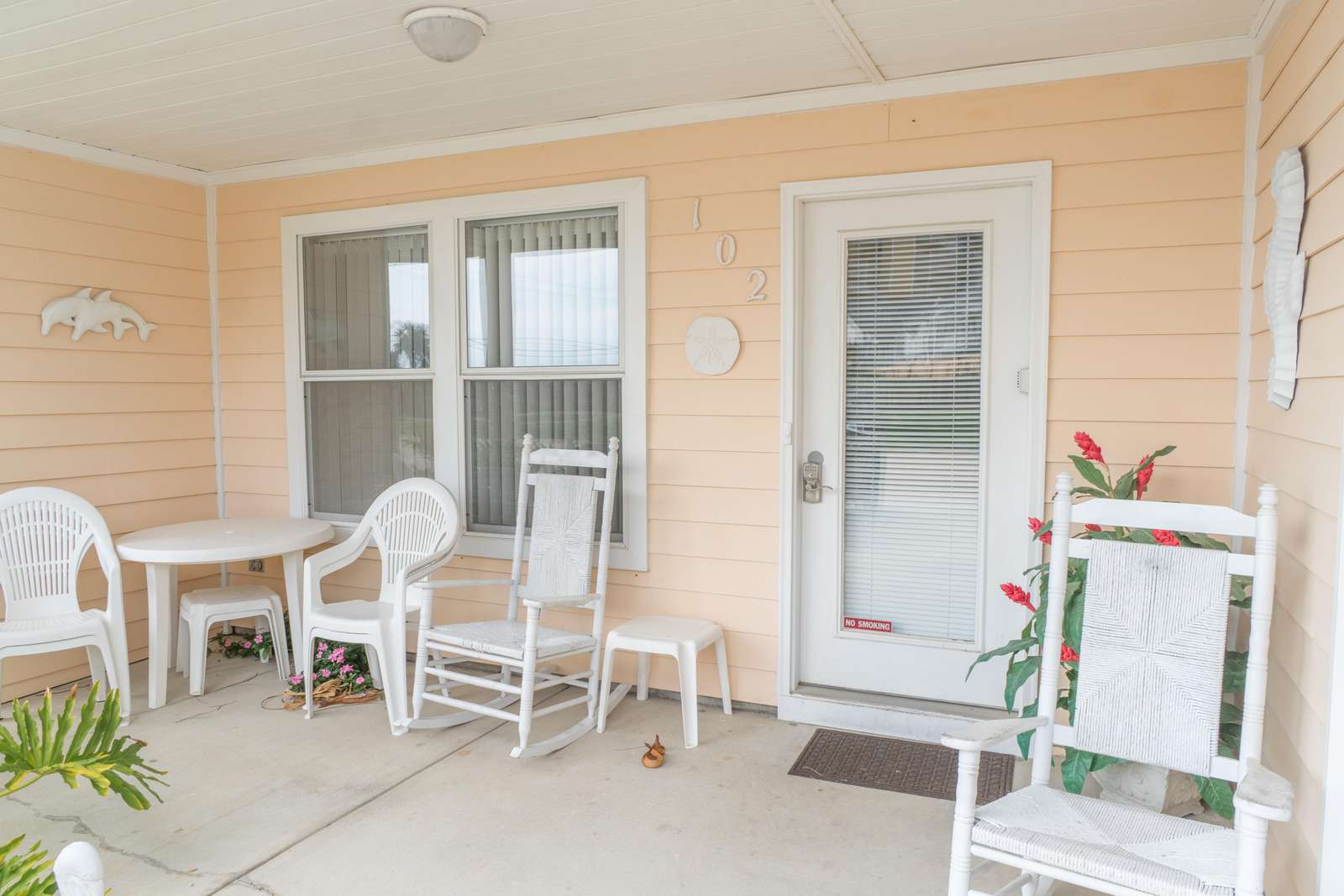 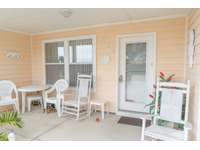 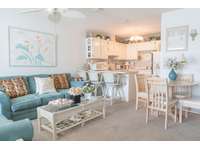 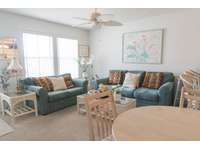 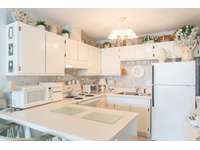 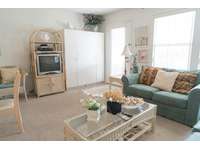 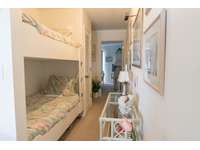 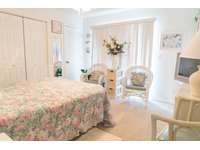 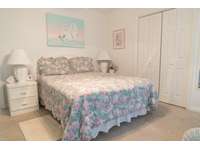 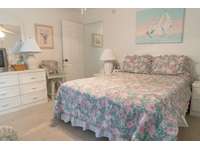 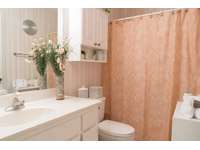 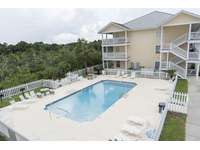 Peachtree Place is a family-oriented complex located on the quieter west end of Panama City Beach. Located across the street from the emerald waters and sugar white sands of the Gulf of Mexico with easy access to the beach. Peachtree Place is designed with large porches and rocking chairs, recapturing the simple carefree times of ‘Old Florida’. Enjoy swimming pools, access to beaches, sportcourt, horseshoes, biking, walking and much more.It has a washer and dryer set in the unit

Minimum rental age is 25 years old. A valid photo ID for the primary renter will be required for check-in. Parties that do not meet the age requirement will be denied entry or evicted from a property without refund.

All reservations will be charged a registration fee, cleaning fee, damage waiver and tax. These fees are non-refundable and will appear as a separate line item on the invoice.

All properties are non-smoking. Smoking in the property will result in a $500 restoration fee and will be charged to the credit card used to make the reservation. The damage waiver does not cover damage caused by smoking.

FYI: ***there is no WiFI****** First, the pros: the location is AMAZING, the best you can get without being actually waterfront. It's right across from a crosswalk with a pedestrian light (which cars speed right through--please be careful!) that leads onto a public beach access. There's an outdoor shower right at the entrance of the property to keep from tracking sand in. The complex is between two high rise resorts so you actually see a stretch of sky, not just buildings. I loved that it was on the walk-in level, which was so easy for unloading and for dashing in and out to the beach, with no worries about stairs or balconies for my little ones. The place was comfortably furnished and bright (I've never seen so many chairs and lamps in such a small space). They decor was definitely old-school Florida, which had a nostalgic appeal. Sitting in the rocking chairs in the sun with one of the 2347 wine glasses hit the spot. There was a TV in both the living room and bedroom. My kids had fun running around on the basketball court, and the pool has two shallow ends with the deep end in the center, which I really liked. Behind the complex (so, the view from the pool and the back patio of the condo) is a little wetland, which is wonderful--so much quieter and more scenic than overlooking a parking lot, building, or construction site (which let's be real, is the dominant scenery in the area). My nature-obsessed 4th grader loved chasing the lizards and frogs. The complex is on the quieter end of PCB, almost Miramar, in a family-oriented area (or possibly we were there at a more family-oriented time). Walk down the beach just a tiny bit and you'll be out of the resort crowd completely--blissfully quiet and uncrowded. Just a couple miles back eastward and you'll be at Pier Park, and the public playground and splash ground. Some might consider this a con, but the beach access point right in front of the complex (#73) had a storm drain runoff. I actually loved it, because it made a shallow river that was much more calm, warm, and fun for my toddler to play in than the big ocean, which was a bit rough and cold in early April. The next door neighbors, owner-occupiers, were very friendly and gave us a lot of good local recommendations. The kids loved the bunk beds, and the bedroom gets sunlight in the afternoon instead of the morning, which is great for sleeping in. (Of course if you have kids that may still not happen for you since the bunk beds are not in a doored area--they're just out in the open--so they wake up at the crack of dawn). Now for the cons. The office where you "check in" is a full 22 minutes from the actual property. I probably could have noticed if I'd more carefully mapped out both locations, but I didn't even think to check that when I got the address just a few hours prior to check in--just assumed they'd be close. So that's an FYI for planning purposes. I say "check in" in quotes because the place doesn't have a physical key...we went all that way basically for a parking pass, which no one else in the complex even had. Then the door code turned out to be incorrect, but after only a moment's panic we were able to get in touch with the leasing company for the correct code, even at midnight (the office's responsiveness was a big plus! Small nitpicky thing: the 800 number listed as the emergency after hours contact just had a recording saying to email the office. That caused a moment of panic--if you need actual help, call the local office number). The place was mostly clean, but did have that musty damp smell when we arrived. I think the carpet had been shampooed and not allowed to dry because it was wet underfoot. The dishwasher had dishes still in it--wasn't sure if they were dirty or clean. The drain in the shower had hardwater stains that made it look gross, but that's not a huge deal. However, we did find a nasty, mud-dirty used washcloth in the bathroom that grossed us out. The worst though, was that the back of the closet looked like it might have had mold stains. I didn't examine too closely, but I'm fairly certain. My dad also owns a beach property, so I'm familiar with the smell and look--however, that's also the reason I have a lot of grace about it. I know very well how hard it is to combat must in damp climates. And this was definitely an older place. The kitchen had a ton of random equipment in it (pretty sure you could host a small wedding with the number of wine glasses in that place!), but was missing some conveniences: foremost among them potholders and dishtowels, which we discovered when we went to remove something from the oven. There were also only small fry pans and one spatula with gunk stuck on it. (No scissors either, but I've noticed this as a trend for rental properties--maybe people steal them.) There were not very many towels and only two washcloths, I recommend bringing extra if your children tend to steal your neatly hung dry towels as mine do. One of the towels looked a bit dingy and stained. The bed is a double, not a queen, and all the mattresses are hard as rocks (this is more of a neutral FYI than a con). There is only one stiff bed pillow per person but there are lots of sofa pillows. I'm a soft-mattress person but I brought my own soft pillow and slept great. The sofas are soft and comfy though. The TV in the living room had cable, but none of the 5+ remotes seemed to work for it other than turning the power on

Really nice stay. Few steps away from the beach!!

Everything was great except the check-in process needs work.

Property is not available for the selected dates
Book Now